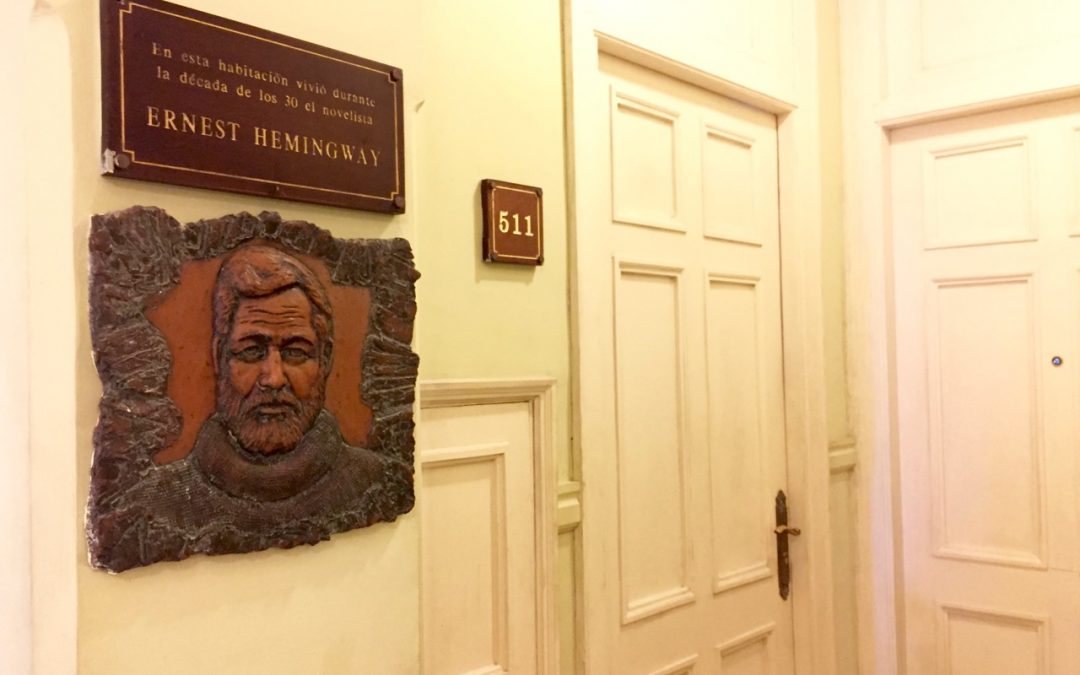 Four Ways to Connect with Ernest Hemingway in Cuba

There was a long list of reasons why I wanted to go to Cuba. Ernie was one of them. Ernie, as in Ernest Hemingway, one of America’s most celebrated literary masters, famous for his legendary life style and quirky personality as much as his writings.

Ernie, who also happens to be one of my favorite authors, fell in love with Cuba. Inspired by the island and his experiences there, he lived there for close to three decades, much longer than at any of his other residences around the world.

You know that classic interview question about who, if you could choose anyone from history, you would pick to have dinner with? Ernie is my person. Everything about him fascinates me and I love his writing style. I’m envisioning the two of us sipping pre-dinner mojitos on the roof top of hotel Ambos Mundos (more on that in a moment) as the sun is setting over Old Havana. We had just spent the morning fishing together and the afternoon talking about his book, Farewell to Arms, his very first best-seller which he wrote after spending time in the region where I was born. An obvious connection.

Unfortunately, I will never be able to have dinner with Ernest Hemingway and pepper him with the long list of questions I’m dying to ask him, including those about his time in Cuba. But at least I was able to learn more about him by visiting a few places where he spent a substantial amount of time while living on the island.

If you are a Hemingway fan like me, or simply enjoy history and cool experiences, here are four ways to retrace his steps in Cuba. They are all interesting and fun places to visit even if you take Ernest Hemingway out of the equation.

1. Have a mojito and leave your signature at La Bodeguita del Medio

La Bodeguita del Medio is a restaurant and bar, located in the heart of Havana Vieja (Old Havana), close to the Plaza de la Catedral. It is famous for three things: It is rare to find no lines in front of La Bodeguita del Medio in Old Havana.

Due to its popularity, copies of La Bodeguita del Medio can now also be found in other locations in Cuba. I visited one in Varadero, a popular seaside resort, located about 2 hours east of Havana. They can be found outside of Cuba, in other parts of the world, too: U.S., Mexico, Colombia, Costa Rica, Germany, United Kingdom, Italy, and even Macedonia. This wall is from La Bodeguita del Medio in Varadero. See those signatures? They covered every wall! And when that space ran out… the patrons moved on to ceilings, floor, doors, windows, even the outdoor patio.

Of course, there is only one original La Bodeguita del Medio which can boast that Ernie was a regular, paying daily visits to enjoy his beloved mojito, while thinking about the next chapter of the book he was writing. It may be crowded, a bit (too) touristy and the mojitos are overpriced, but it is a place you shouldn’t skip when you are in the Cuban capital. Don’t forget to ask your waiter for a marker so you too can leave your signature among thousands of others.

Smart Traveler Tip: This place can get very crowded with long lines of tourists waiting to get in, especially when the cruise ships are in port. Try to get there early in the day or simply be prepared to wait. There is usually a live band, playing seductive salsa music, which makes standing in line almost enjoyable.

La Floridita, an upscale seafood restaurant and a cocktail bar, is another place in Old Havana where Ernie liked to spend time. I was told he even drove here with his wife Mary on a regular basis all the way from their property on the outskirts of Havana. There is another famous Hemingway quote: “I drink to make other people more interesting”. Ernie loved hanging out with interesting people, but even more so, he appreciated a good cocktail, so not sure which came first, the drinking or the people.

If La Bodeguita del Medio invented el mojito, El Floridita considers itself the birth place of the daiquiri or la cuña del daiquiri as Cubans would say. The place, I was told, is also a bartender school so it is only natural that they invented some type of cocktail. Ernie’s favorite drink here was the self-invented Papa Doble (Hemingway was affectionately referred to as Papa in Cuba), which basically altered the original daiquiri recipe by cutting out the sugar and doubling the rum. Today’s version, widely known as the Hemingway special, has grapefruit juice and maraschino added with some sugar put back in. Not all of us can handle a stiff drink like Earnie…

Apparently, my beloved author could put back quite a few Papa Dobles during one afternoon. I heard different versions on how many, but they all agree that it was at least six. No judging here. One should make a drive from the suburbs worthwhile…

There are many author memorabilia on display, including the bar stool where he sat and the sign with more famous Hemingway words: My mojito in La Bodeguita, my daiquiri in La Floridita.

“My mojito in La Bodeguita, my daiquiri in La Floridita.”

Smart Traveler Tip: La Floridita is located close to the National Museum of Fine Arts of Havana and also the Museum of the Revolution, so it can be a nice place to take a break after your museum visit and enjoy a refreshing daiquiri. For kids, there is a non-alcohol version.

When he first came to Cuba, Ernie rented a room at the hotel Ambos Mundos, which served as his first Cuban home for seven years (1932-1939). He stayed in several rooms on the 5th floor, but Room 511 was his favorite. Once you see it, it is easy to understand why: this spacious corner room has beautiful views of Old Havana and the harbor.

While other rooms on the floor where he stayed can be rented by guests, Room 511 serves as a mini museum showcasing the original furnishings, one of the author’s typewriters, some of his fishing rods and a few other things. Smart Traveler Tip: The hotel is most famous for its renown guest, but there is another good reason to pay a visit: it has a lovely roof top restaurant, which offers fantastic views of Old Havana and the harbor. They serve excellent mojitos and arroz con pollo, one of Cuba’s signature dishes. I sampled both for this article, they were delicious.

4. Head out of Havana to Finca Vigia

Ernie fell in love with Cuba so deeply that he decided to extend his stay indefinitely and purchase a house in San Francisco San Paula, a suburb of Havana in 1940. He lived there until 1960 when he returned to the U.S. After his death in 1961, the Cuban government took over the property despite objections by the author’s last wife. I was told it was neglected for many years, until it was eventually restored and renovated in 2007. Today, it shines again as a unique cultural gem, serving as a museum and a great reminder of Cuba’s strong influence on Ernest Hemingway.

The property is called Finca Vigia, which could be translated as the “lookout farm or an estate”. It is an easy, 30-minute car ride eastward from Havana and very much worth a visit. Situated on a small hill, it is quite special and the author’s house, along with its fantastic furnishings, is beautiful. This is where Hemingway brought his most treasured possessions: animal trophies, his fishing rods, paintings and sculptures, manuscripts, photographs and correspondence and last but not least, an extensive library of almost nine thousand volumes. Note that in order to keep the interior of the house protected, you won’t be actually able to enter it. However, the “museum” is designed is such a way that you can view every single room by simply walking around the house and looking through the windows.

For a huge Hemingway fan like me, it was such a special experience to see several of his desks and typewriters and to imagine the author writing his celebrated The Old Man and the Sea (my favorite book of his) and For Whom the Bell Tolls right there! A room on top of the tower at Finca Vigia, which Hemgway’s wife had built as a workplace for her husband. Apparently he did not use it much and instead preferred to work in one of his bedrooms, always standing.

I loved learning a few things about Ernie I did not know before, like how he apparently always wrote standing up (not sitting down with his typewriter) and in the mornings only. The afternoons were reserved for cocktails and, when he felt like it, visiting Havana. He would weigh himself every day, keeping markings of his weight on the wall of his bathroom. He loved playing baseball with the neighborhood kids. And it was here, on Finca Vigia in Cuba, where he apparently started his famous cat collection.

Aside from the house, there are several other parts of the property that are interesting, some unusual, a few even peculiar: a small tower which his wife had built for him as his special writing place and from where you can enjoy a distant view of Havana (on a clear day one can see the roof of El Capitolio, the National Capitol Building), the pool where he enjoyed a swim every day, a cock fighting ring, a dog cemetery and even Pilar, his beloved fishing boat, which was brought to the property because it was such a key part of Hemingway’s life in Cuba. At the end of your tour, you can stop by a small stand next to the entrance way and try Coctel Vigía, yet another cocktail Hemingway liked. This one was apparently self-made and Ernie enjoyed it while chilling at home. The ingredients are very simple: freshly squeezed guarapo (sugar cane juice), some lime juice and a wedge of pineapple. The author liked to add some good Cuban rum as you can guess, but you can opt for a non-alcoholic version if you prefer. If you visit Finca Vigia, you can try another favorite drink of Ernie’s, Cocktail Vigia. Here is how sugar cane is being pressed to obtain guarapo, one of the key ingredients.

It was fun to observe how sugar cane juice was squeezed out of the cane with a special press before it was poured into a glass along with the rest of the ingredients. It does not get fresher than that! Though I’m not sure I buy it, a sign posted nearby claimed that this is where the author tasted his first pineapple.